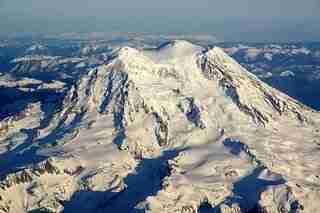 It's high time I started writing something for my blog.

I've been doing a lot of thinking about fear and faith. I've always thought that the two were mutually exclusive. I thought if I had more faith in...God, myself, etc., I wouldn't have as much fear in my life. This weekend, I learned exactly how wrong that kind of thinking was.

You see, I am afraid of heights. Any time I am above the ground, I get uncomfortable. I can get dizzy on a 2 foot high ladder. So, of course, my husband happens to be a pilot and he loves flying. This weekend, he offered me a chance to see a friend I hadn't seen in almost 15 years. All I had to do was go along on the 3 hour flight over the Cascade mountains. I have flown with him on many occasions, and I love flying over picturesque scenery...the Cascades being one of my favorites. The weekend looked perfect.

We loaded up the 3 year old princess, and made the uneventful trip. Had a great time and stayed every moment we could. The weather began to move in, and it was time for the return trip. Right after take off, we discovered that we had a great tail wind. Beautiful day, happy daughter, lots of laughter, everything was right with the world...and then bam. Or rather, sputter. The engine coughed. Just a tiny cough...could have had many causes. Except that our electrical system showed the alternator was no longer charging. With 2 1/2 hours left in our trip and a mountain range ahead of us, we had only the juice that was already in the battery.

My love immediately went into professional mode, diagnosing the problem, reviewing options. He had mapped out several alternative airports, but knew two very important details: we would most likely need parts, and most of the airports on our route wouldn't have them. With the weather moving in, wherever we stopped, we'd stay. Ideally, we would have turned around, but now that tail wind wasn't so much of a blessing. We'd be fighting it going back, and if something WAS wrong with the engine, we'd be in trouble.

He explained that we were fine, but he was going to have to turn off the radio to conserve power.

Thus began 2 1/2 hours of sheer terror for me. Since I tend to talk to God even on a good day, it seemed like having a 2 hour conversation with Him at that point was appropriate, and He seemed amenable. Even more so, He seemed eager to have me listen.

I thought about that for quite a while. In my normal life, when I'm in a frightening situation, I tend to try and control everything. That plane, however, is not something I can control. I knew my husband has a reputation of being an exceptional pilot and very rational, so anything I suggested would probably not help the situation. In fact, I realized that the best thing I could do -- was to do nothing.

And that was when I finally started to understand faith. Faith didn't make my fear go away. Faith just helped me control the panic. All I had to do was to stay in the plane, keep quiet, not panic, and in 2 1/2 hours I would be sitting safely on the ground at our home airport.

Minor turbulence accompanied our entire flight. I sat with a death-grip on the overhead handle, much of the time with my eyes closed. I was reminded of something I read recently that life is like a railroad track -- one track is good things and one is bad things -- and both tracks are there all of the time. We can get stuck on one or the other. I was definitely stuck on a bad track at that moment.

As we climbed over the Cascades, I was reminded of how much I love to look at the mountains. In particular there was a lake I'd wanted to see again from the air, and I knew we had to be close. I pried open my eyes, determined to try to get some good out of the experience. There below me was the beautiful lake that I'd wanted to see, complete with tiny island in the middle. I glanced around. The scenery was breathtaking. Since enjoying the scenery wouldn't make any difference in whether I died in the next five minutes, I decided I might as well look around.

I didn't stop being afraid. I didn't stop watching the minute hand on the clock crawl forward, and I didn't stop having my very serious discussion with God...but I did start enjoying the journey.

That precious small voice in my head whispered, "Now. What else have you been letting fear keep you from?"

Once we were on the ground, I slowly began to recover. I asked my husband how I could ever get over my fear. He startled me by saying that he didn't think I ever would...but that fear was normal. "What you have done is master your fear. I watched you do it." He went on to tell me of people he knows who have fears...people like firemen.

Somehow, I'd always thought that other people didn't face the same paralyzing fears that I do. I wanted to enjoy the ride the way my daughter did -- laughing, staring out the window, and crying "weeee!" whenever we hit turbulence.

I asked a dear friend about fear. She wrote back: "Fear and Courage are inseparable."

What else is fear keeping me from?

2 comments on “Thoughts on Fear”